This product is intended for those who have received direct introduction from a qualified master. If you have not yet had that opportunity but are seriously interested in the teachings, you may purchase it provided you seek to receive direct introduction as soon as the possibility arises. 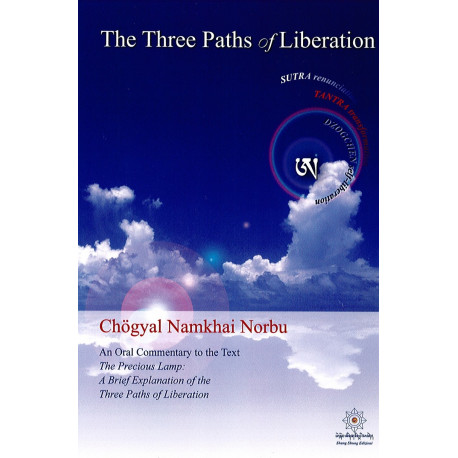 [E-Book] The Three Paths of Liberation

The Three Paths of Liberation is a straightforward guide to the understanding of the essence of all paths, Buddhist or not, leading to spiritual realization. The book explains that all paths can be described as three main methods, no matter what tradition is being considered. Those three paths, in an approach that is part of Dzogchen knowledge found in a teaching called the tharlam desum, are that of renunciation, transformation, and self-liberation. We can recognize that in Buddhist terminology the path of renunciation is Sutra, that of transformation, Tantra, and that of self-liberation, Dzogchen.

Once released from an ironclad identification with a particular school or current of dharma born from a limited point of view, we become free to take Rinpoche’s advice: “We can apply all three paths of liberation, and a practitioner of Dzogchen who understands the essence of the teaching always integrates all three. I will try to communicate and explain these paths so you can have a clear idea of them and will find no conflict between Sutra and Tantra, or among different schools and traditions.”

Because this book contains Dzogchen practices, it is intended for those who have already received transmission.