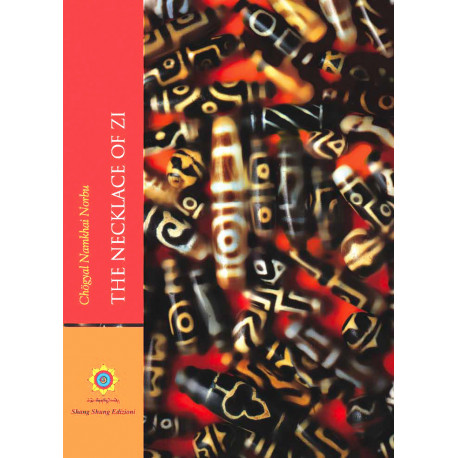 The Necklace of Zi [book + ebook]

The Necklace of Zi (gzi yi phreng ba) is a fascinating anthropoligical survey of ancient Tibet, based on a lecture given by Chögyal Namkhai Norbu in 1975 to the annual meeting of young Tibetans in Switzerland. Some years later, The Necklace of Zi was published in Dharamsala in both Tibetan and English, immediately generating great interest for a completely new approach to the history and culture of Tibet.

Chögyal Namkhai Norbu traces back the emergence of his country's culture nearly 4,000 years and identifies the original Tibetan system of writing in the ancient Mar (smar) alphabet, from which the present cursive characters (dbu med) evolved. Besides the analysis of the Tibetan history and language, together with a short chronicle of the pre-Buddhist Bön, this text addresses in a simple but very meaningful way the crucial topic of the harmonious union of Dharma and politics.

FOREWORD 7 PREFACE 9 THE NECKLACE OF ZI 13 AUTHOR’S FOREWORD 15 1. THE TIBETAN PEOPLE 17 2. THE TIBETAN LANGUAGE 21 3. BÖN AND BÖNPOS 27 4. SHANG SHUNG AND TIBET 35 5. DHARMA AND POLITICS 41 NOTES 45 APPENDIX 61 The Thirty Letters of the Tibetan Alphabet A BRIEF PRESENTATION OF THE LIFE-STORY OF THE AUTHOR 63 TIBETAN TEXT 67 BIBLIOGRAPHY OF TIBETAN SOURCES 123 SELECTED BIBLIOGRAPHY OF THE AUTHOR 125 INDEX OF TIBETAN AND SANSKRIT NAMES AND TERMS 127