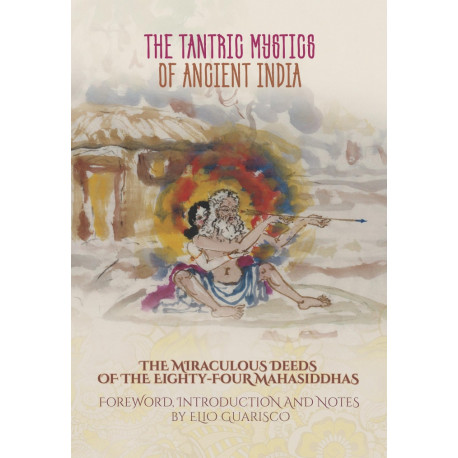 The Tantric Mystics of Ancient India

The Miraculous Deeds of the Eighty-Four Mahasiddhas

Translated from Tibetan by Elio Guarisco

The siddhas appeared during a time of widespread diffusion of Buddhism in India when the monasteries with their preference for formal study of  doctrine and philosophy marked by a strong intellectual bias enjoyed great prosperity and success within the societal structure. However, the spirit  of the teachings of the Buddha became arid under the scholasticism of the large monastic universities in the north of India where hundreds of scholars were trained. Appearing in this climate, the siddhas revitalized the spiritual quest by abandoning the monasteries and preferring cemeteries, caves, the haunts  of the untouchables, and royal palaces as locations for their exploits. The siddhas revealed that those at the base of the social pyramid, the beggars, prostitutes, and butchers inhabiting the peripheries of the cities, had the spiritual potential to progress on the path of awakening. The revolutionary message of the siddhas which offered the possibility of inner development in the heart of Buddhism without denying the pleasures of this life also found favorable ground in royal and aristocratic palaces where the renunciation of the world in monasticism had found no place.  Abhayadatta’s brief biographies of the eighty-four mahasiddhas were intended to bear witness to the unique demonstration of the essence of tantric teachings their lives offer, and not as historical accounts. Inspiring the heart of the reader, the tales demonstrate the free spirit of their protagonists, collecting in a few pages significant episodes in the lives of these masters imbued with their determination to reach the goal of their spiritual path.