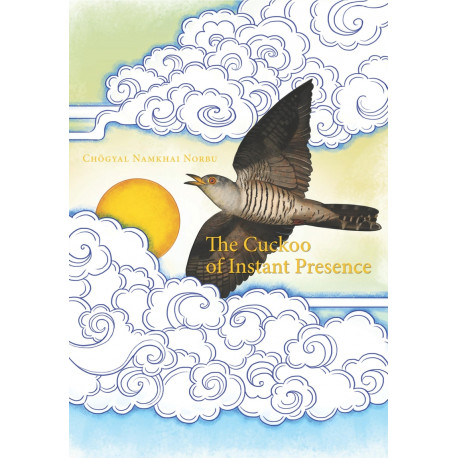 The Cuckoo of Instant Presence

“The Dzogchen teaching is a living knowledge that is transmitted and applied. It is not reserved for spiritual adepts. The teaching is useful for those who want to live agreeably. For someone with strong faith, it is extremely useful. Even those who do not believe in anything and think that nothing exists after death could find a more peaceful life through it. To enjoy tranquility, you must have experience of the state of knowledge and know how to relax. When you discover your true condition and actually find yourself in it, you finally understand the real meaning of relaxation. The Dzogchen teaching is a way of relaxing totally, so you can understand why the learning, application, and practice of Dzogchen is indispensable for every individual.”– Chögyal Namkhai NorbuThis book is based on a teaching retreat on The Six Vajra Verses, an original Dzogchen text also known as Rigpai Khujug: The Cuckoo of Instant Presence, held at Merigar in Arcidosso, Italy, from December 23, 1985, to January 5, 1986, the first complete oral commentary he gave on this important text in the West. The  Six Vajra Verses is divided into three equal parts of two verses each, each explaining the base, the path, and the fruit of the Dzogchen teaching. Ultimately it becomes clear that all three are facets of the primordial state, our real condition as it is and always has been. The  Rigpai Khujug teaching is presented here first in a concise explanation followed by a detailed one. An appendix titled A Brief Guide to the Methods and Traditions of Tibetan Buddhism follows, a teaching given by Rinpoche during a weekend retreat in London in the late 1980s. Our hope is that the Dzogchen teaching can thus be more clearly understood in the context of other Buddhist traditions.