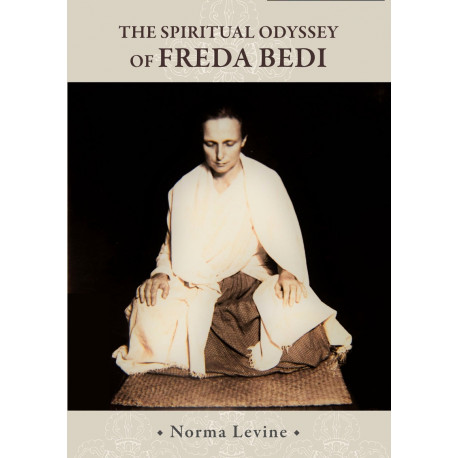 The Spiritual Odyssey of Freda Bedi

Freda Bedi had a big heart and a big life. An English head prefect and Oxford graduate, a devoted Indian wife and doting mother of three, a hands on social worker and investigative journalist, a university teacher and Tibetan translator, a Gandhi satyagraha and Buddhist nun: who was Freda Bedi, Gelongma Palmo, affectionately called Mummy-la by all the Tibetans including His Holiness the 16th Karmapa and His Holiness the Dalai Lama? Who was this lady who tread so lightly yet left an indelible footprint, obscured but not forgotten? Fearless even in death, Freda died sitting in meditation with no rigor mortis, her body remaining supple for four days with warmth around the heart.

“Mrs. Freda Bedi whom we all lovingly called Mummy was truly a giver of life for thousands of Tibetan refugees. But she was much more. She delved deep into ancient Tibetan wisdom and became a living representative of its value to the rest of the world when it was being destroyed in Tibet. The history of Tibetan Buddhism in the  West  would not be complete without her. ”

“The Spiritual Odyssey of Freda Bedi is a rich intimate journey into the life of an extraordinary pioneer in the dialogue between Tibetan Buddhism and the western world. Her closeness to His Holiness 16th Karmapa was unprecedented, enabling her to move into the inner recesses of his world and to have a lasting impact on the Tibetan refugees. This riveting book shares her journey from England to India, to marriage with a Gandhi activist, motherhood and ultimately a life of deep spiritual realization in the Tibetan tradition as it emerged into view in the 1960s and ‘70s.”

– Lama Tsultrim Allione,  author of Women of Wisdom and Feeding Your Demons

“Freda Bedi was one of the most important female disciples of the Sixteenth Gyalwang Karmapa. Her life was one of dedication to the well-being of others, whether through politics, social work or religion.”
– Goshir Gyaltsab Rinpoche

“Freda was, in my humble opinion, a fantastic Buddhist and a very holy woman. As one of the influential people who helped to bring Tibetan Buddhism to the West she worked tirelessly to teach and find sponsors for the Tibetans to help them survive outside of Tibet.”
– Venerable Chime Rinpoche