> English language products>Books>An Ornament of the Thought of Nagarjuna
Sale! 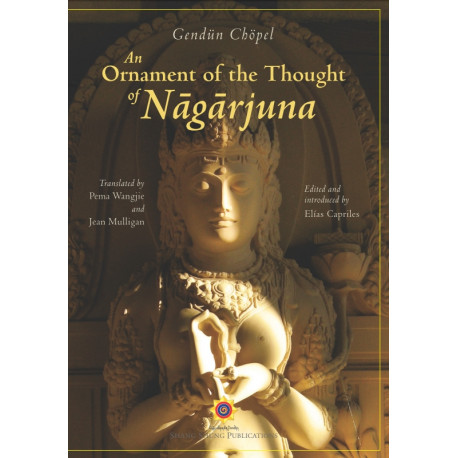 An Ornament of the Thought of Nagarjuna

Translated from Tibetan by Pema Wangjié and Jean Mulligan, edited by Elías Capriles

From Chögyal Namkhai Norbu's Preface: “Gendün Chöphel, eminent scholar of 20th-century Tibet, was a master of both the traditional curricula of his time – the five branches of Buddhist wisdom and the five subjects of Tibetan culture – and of numerous modern subjects in such fields as philosophy, language, and history. I need not detail his accomplishments and life history here, as these are well known from other sources. The Ludrub Gonggyen (kLu sgrub dgongs rgyan) clearly demonstrates his profound knowledge of both Sutra and Tantra and his precise understanding of the essence of the teachings of Buddha and the thought of Nagarjuna. Careful study and analysis of this work – whether by scholars who approach it with impartial minds, practitioners who seek understanding of the Buddha's teachings, or those engaged in research – will lead to an understanding of the essential meaning of the Buddha's teachings."