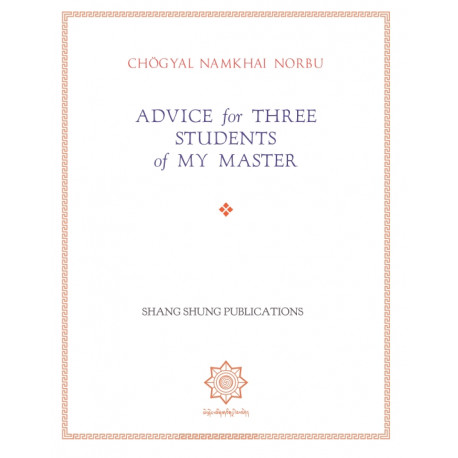 Advice for Three Students of My Master

The three songs translated in this collection were written by Chögyal Namkhai Norbu in the early summer of 1988 in eastern Tibet, during a visit to Khamdo Gar, once the residence of Rigdzin Changchub Dorje, his root teacher of Dzogchen.

The day of his departure, Chögyal Namkhai Norbu was asked by several old students of Changchub Dorje for advice about practice, and he then offered these three spontaneous songs containing the essence of Dzogchen in its three aspects of view, meditation, and conduct. The first song, Advice to the Hermit Lama Namgyal, expresses the essence of the Dzogchen path in just a few, succinct lines. It is dedicated to Lama Namgyal, a Nyingmapa monk who had lived for many years at Khamdo Gar. The second song, Advice to Lama Tsega, is dedicated to a practitioner who was originally a monk from the Drugpa lineage, here called by the Sanskrit equivalent of his name, Ayu. In this song, the principle of instant presence as the main point of meditation is presented with brilliant clarity. The last song, Advice to Lama Pema Loden, is a short, beautiful poem offered to Pema Loden, a relative of Changchub Dorje and at that time administrator of Khamdo Gar.