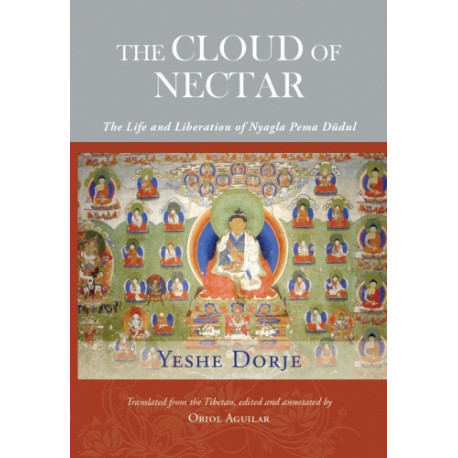 The Cloud of Nectar

The Cloud of Nectar is Oriol Aguilar’s annotated translation of the biography of Nyagla Pema Düdul, a 19th century master, tertön, and well-known exponent of the practice and realization of Total Perfection (Dzogchen) written by Yeshe Dorje.

Translated from Tibetan by Oriol Aguilar

The Cloud of Nectar is an annotated translation of the biography written by Yeshe Dorje of Nyagla Pema Düdul, a nineteenth-century master, tertön, and well-known exponent of the practice and realization of Total Perfection (Dzogchen). Born in the rugged eastern Tibetan region of Kham, despite an auspicious birth accompanied by miraculous signs and prognostications, like the great eleventh-century mystic Milarepa, as a fatherless youth Pema Düdul suffered great personal loss, severe deprivation, and repeated violence. A social outcast, his early attempts to obtain spiritual instruction were cruelly thwarted. Time and again, after a vicious beating as he struggled to avoid the starvation that claimed his brother’s life, propelled by empathy even toward his attackers, he would renew his quest for bodily and spiritual sustenance. Increasingly recognized for his spiritual attainments, he sought and exchanged teachings with some of the region’s leading figures of Buddhist and Bön learning and practice. Generously sharing his spiritual treasure, he gathered a large number of followers and founded Kalzang monastery, which survives to this day. But despite his fame and spiritual influence, Pema Düdul never held a position in any religious hierarchy, choosing instead the austere yet joyous lifestyle of a wandering yogi and remaining in solitary meditation retreat for extended periods until, upon his passing, he attained the Rainbow Body.

In this important scholarly work, through his substantial introduction Oriol Aguilar precisely places his subject in that fertile time and place in which both the struggle to preserve traditional learning and practice and exceptional spiritual creativity flourished against a backdrop of social and political unrest. Although the biography is filled with descriptions of wondrous visions and dreamlike encounters, its vividly frank presentation of the life of Pema Düdul conveys a sense of proximity and relevance rarely found in works of this genre.