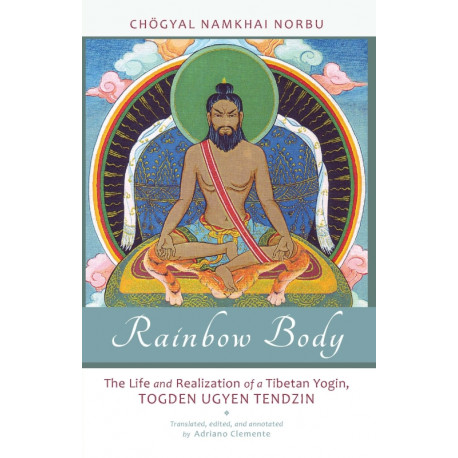 This book traces the life story of twentieth-century Tibetan yogin Togden Ugyen Tendzin (1888-1962), who attained realization of the rainbow body. Translated from Tibetan by Adriano Clemente.

One of the highest attainments of Dzogchen, an ancient spiritual path recognized as the supreme vehicle of Tibetan Buddhism, the rainbow body is the transmutation of the physical constituents of the body into the essence of the five elements. This book traces the life story of twentieth-century Tibetan yogin Togden Ugyen Tendzin (1888-1962), whose amazing realization of the rainbow body at his death was witnessed in Eastern Tibet.

The author of this fascinating biography is Chögyal Namkhai Norbu (1938-2018), one of the great masters of Dzogchen, and nephew, on the paternal side, of the Togden, a title meaning “endowed with realization," an expression accorded to highly realized yogins in Tibet. The Author, who received profound teachings from his uncle, based his book on extensive notes he took while with Togden in 1954 in Derge, and on information given to him by Sala Kama Samten (1919-1993), also a disciple and nephew of the yogin. Togden's master was Adzom Drugpa, Drodul Pawo Dorje (1842-1924), one of the greatest Dzogchen masters of the last century, renowned for the depth and clarity of his teachings. A short biography of this master is here included, together with a biography of the yogini Lhundrub Tso (1864-1946), also a close student of Adzom Drugpa and grandmother of the Author.

Translator’s Preface vii 1. Birth and Childhood 3 2. Depression and Madness 9 3. Meeting with Adzom Drugpa and Receiving Teachings 11 4. Solitary Retreats 15 5. Trial by the Chinese 17 6. Back to Adzom Gar 23 7. Life as a Wandering Yogi 27 8. Adzom Drugpa’s Final Instructions 29 9. Years of Retreats and Wandering with Pema Kundrol 33 10. Birth of Chögyal Namkhai Norbu 37 11. Invitation from the King of Derge 39 12. Showing Miraculous Powers 45 13. Practicing and Teaching 47 14. Last Years and Realization of the Rainbow Body 51 Appppendix A. The Life of Adzom Drugpa by Lhundrub Tso 57 Appppendix B. The Life of Lhundrub Tso by Jamyang Chödrön 71 Appppendix C. The Royal Lineage of Derge 81 Notes 83 Bibliography 117 Indexes Names 123 Places 129 Terms and Expressions 133 Texts Cited 137 About the Author 139